HE Mark Regev, the Israeli Ambassador, spoke at the School of Oriental and African Studies (SOAS) in Central London on Thursday evening. Naturally – given that SOAS is a hotbed of the anti-Israel movement – there were anti-Israel protests and demands for him to be banned.

In the past, the protests and the Palestinian flags would have been all that were in evidence. Today, however, such things do not pass unopposed. North London Friends of Israel joined the call for a demonstration in support of Mark Regev, free debate and Israel. Thanks and well done to all who came. 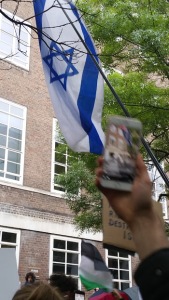 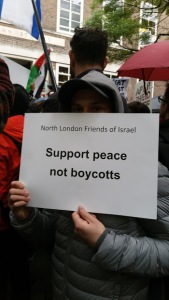 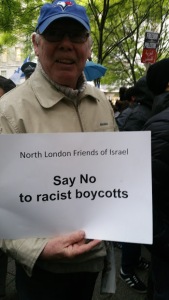 END_OF_DOCUMENT_TOKEN_TO_BE_REPLACED

This year, the notorious Islamist hatefest known as al-Quds Day is planned for 18th June. Yes, that’s right – such a short time after a murderous Islamist terror attack on London, supporters of Islamist terror are proposing to parade through the streets of London in support of the Islamist terrorists of Hamas and Hizbullah, and to advocate the extermination of the Jews of Israel. Please protest to your MP, the Mayor of London and the government about this racist march on the streets of London, and ask them to prevent this sickening display from taking place. Let’s keep terrorism and racism off our streets.

Points to make in a letter:

You should always aim to use your own words, and say what you want to say. But here are some points that you might find helpful:

For contact details of the people to write to, read on:

END_OF_DOCUMENT_TOKEN_TO_BE_REPLACED

This time in Golders Green, where the sun shone and we gained a lot of positive responses to our message. Thanks to all who helped man the stall and distribute leaflets, and those who signed up for our mailing list. Especial thanks for an on-the-spot donation from one kind sympathiser! 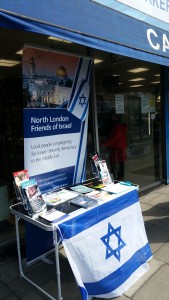